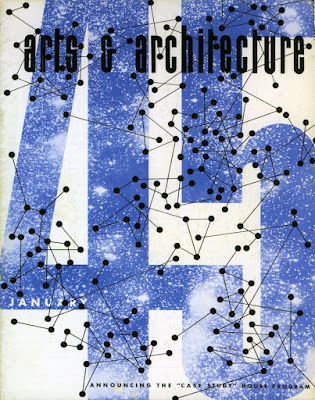 The dawn of a new year makes anything seem possible. In January 1945 John Entenza, the ambitious editor of a small-time Californian magazine called Arts & Architecture, conceived and announced The Case Study House Program that set out to “begin immediately the study, planning, actual design and construction of eight houses, each to fulfil the specifications of a special living problem in the Southern California area”. There was never a better example of the architectural press directing, rather than simply reflecting, the shape of the built environment. Acting as client, the magazine commissioned top US architects to design eight houses that would become inexpensive, replicable prototypes, demonstrating how good modern design, manufacturing methods and materials could help ameliorate the anticipated deficiencies in post-war housing.

The houses would be built, furnished and temporarily opened to the public as show-houses, before being occupied. Of course, they would also be published in the pages of Arts & Architecture alongside carefully chosen complementary advertisers such as Herman Miller, Architectural Pottery and Knoll, who furnished the houses.

The Case Study House Program was so successful that 36 houses were eventually commissioned and published, with 24 being built over 21 years, including the Eames house and Entenza’s own house on adjacent plots (numbers 8 and 9, published December 1945, May 1949 and July 1950). However few, if any, of the houses were replicated. What the program ultimately delivered was a beautiful set of stylised drawings and photographs forming an influential chunk of the post-war Modernist architectural canon.

Michael Ventris (1922-1956) graduated from the AA in 1948. However, he will be remembered as the man who deciphered Linear B – an early form of Greek script used for writing Mycenaean. After hearing Sir Arthur Evans say that the Minoan tablets hadn’t   yet been deciphered in 1936, he made it his life’s goal. By the age of 8 he spoke 5 European languages and throughout his life, he picked them up in a matter of months. He amazed his friends from the AA, Oliver Cox and Graeme Shankland, by slipping into the native tongue when they travelled to Italy and worked in Sweden together. Cox and Ventris’s entry to the T.U.C. Memorial Building competition were published in the AJ of 22.07.48. Ventris’ mother was friends with the art world’s leading lights like Gabo and Moore. Breuer made their furniture and Gropius personally advised the young Ventris to go to the AA. But he had a brilliant, analytic mind that produced sterile architecture. The design for his own house, which appeared in C
Read more