welcome to the Society for the Protection of Architecture Magazines 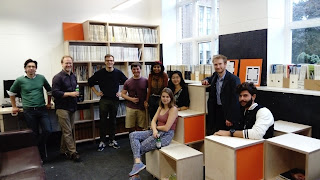 February 20, 2020
It’s hard to find somebody today who doesn’t have a good word to say about the latest RIBA Gold Medal winner, Ted Cullinan. So I thought I’d see how he appeared in the journals – the cutting edge of architectural historiography. His first new build was his Uncle Horder’s house (1958-1960) and actually published in House & Garden in May 1963. There were small appearances in the ‘70s, particularly with the Highgrove housing, but he really started attracting media attention around 1983 – half way between starting out and receiving his Gold medal. In September 1983, the Architectural Review focused on “Romantic Pragmatism” – architects who “have a pragmatic approach to building organisation and construction, and a romantic sensibility”. Cullinan and MacCormac were put forward as the main protagonists, the former being called “the father of a generation of Romantic Pragmatists” in Brendan Woods’s article and both being called “The English Wet Brigade” by Peter Cook. However, Cullina
Read more